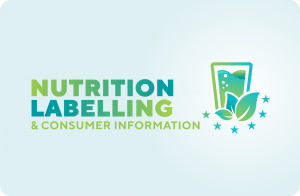 Nutrition labelling is a legal requirement for all soft drinks and most other foodstuffs. It has the purpose of helping consumers make better-informed decisions by providing information about the nutritional composition of the food and drinks to encourage them towards more balanced diets.

Nutrition labelling also plays an important role in incentivising food and beverage companies to improve the nutritional content of their products and to provide healthier choices to consumers through reformulation efforts.

In 2014, the EU Food Information to Consumers Regulation 1169/2011 made ‘back-of-pack’ nutrition information mandatory per 100ml and per serving, with a minimum font size and in tabular form.

Unlike ‘back-of-pack’ nutrition labelling, front-of-pack nutrition information is not compulsory in the EU. Nevertheless, since 2008, Europe’s soft drinks producers were global pioneers in voluntarily rolling out sector-wide full ‘Guideline Daily Amount’* nutrition labelling front-of-pack to inform consumers about the nutritional composition of the drinks they choose (including sugars) in order to make balanced choices. 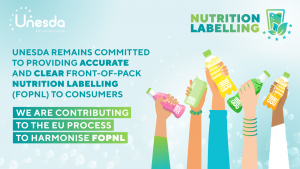 As part of its Farm to Fork Strategy, the European Commission plans to propose an EU-wide, harmonised, mandatory front-of-pack nutrition labelling scheme by the end of 2022.

UNESDA fully supports the European Commission’s ambition. We advocate for an EU-wide, harmonised, interpretative, and evidence-based front-of-pack nutrition labelling scheme that, above all else, is meaningful to consumers, encourages food producers to reformulate and is aligned with EU legislation (such as the EU Food Information to Consumers Regulation and the EU Nutrition and Health Claims Regulation).

When it comes to front-of-pack nutrition labelling, we would like to clarify that, as UNESDA, we do not favour one specific scheme over another.

Nutri-Score is based on a five-colour-code scheme that assigns a score on nutritional quality – ranging from A to E. Nutri-Score has already been implemented by several EU Member States on a voluntary basis.

Currently, an International Scientific Committee on Nutri-Score, composed of national representatives from the countries that have (pledged to) or adopt(ed) the Nutri-Score scheme, is assessing Nutri-Score’s principles and calculation basis and also reviewing requests for changing the algorithm to ensure its efficient implementation. The International Scientific Committee published a report in July 2022 setting out its recommendations for adapting the algorithm for various nutrients and foodstuffs. In late 2022, it plans to publish its recommendations with regard to adapting the specific algorithm for beverages.

The case of the Nutri-Score scheme for beverages: Why it should be improved and how

UNESDA conducted an in-depth technical and scientific review of the Nutri-Score algorithm for beverages, in partnership with French public health consultancy, LinkUp Factory. The conclusion was that the Nutri-Score scheme for beverages is not fully optimised to meet its main public health objectives: to provide clear consumer information and to stimulate further sugar reduction and product innovations from industry to widen consumer choice of beverages containing less or no sugar.

The analysis of the current Nutri-Score scheme for beverages in three markets (France, Spain, Belgium) showed:

See here a few examples from 2021 illustrating why UNESDA proposes an optimised Nutri-Score scheme for beverages.

Note: The A ranking does not apply for soft drinks as it has been allocated to water only in the current Nutri-Score algorithm for beverages.

With this in mind, UNESDA submitted a report, proposing slight adaptations to the Nutri-Score scheme for beverages, to the International Steering Committee on Nutri-Score, which accepted UNESDA’s application and forwarded it to the Scientific Committee.

UNESDA’s report sets out the reasons why it proposes for the current Nutri-Score scheme for beverages to be adjusted and puts forward three possible approaches on how the algorithm could be improved:

UNESDA’s proposed changes are aimed at making the Nutri-Score scheme for beverages more aligned with the EU Nutrition and Health Claims Regulation (1924/2006), helping European consumers make well-informed choices and incentivising beverage companies to reformulate and to continue to innovate with new low- and no-sugar drinks.

We look forward to the European Commission’s proposal for an EU harmonised front-of-pack labelling aimed at helping people to follow healthier diets and ensuring the smooth functioning of the EU Single Market.